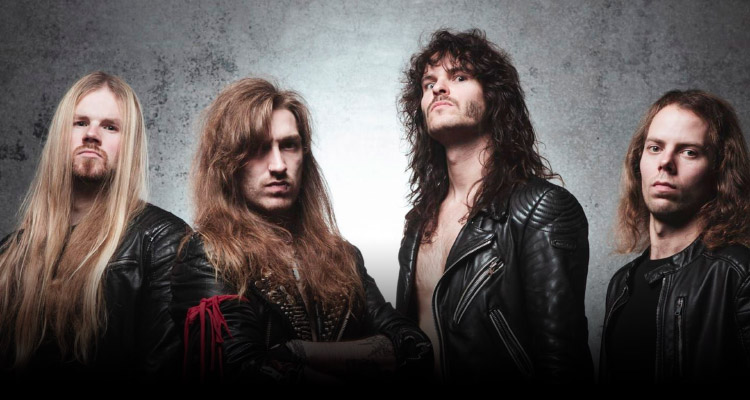 Relentless touring saw them forge an enviable live reputation even before their self-titled debut EP dropped in 2013. Their soaring popularity brought attention from major labels and Napalm Records were quick to snaffle them up. On the heels of several successful European tours - and two sold-out shows in Osaka, Japan - they hit the studio to complete their first full CD. With nine neck-wrecking tracks, ‘Pulses of Pleasure’ (2015) is a balls-out thrash record. Evil Invaders are not trying to reinvent metal. On the contrary, their music is a throwback to (mid-)80s thrash and heavy metal and is characterised by high-pitched vocals, furious riffing, face-melting solos, a rhythm section as tight as a duck’s arse and tons of aggression. Their sophomore effort “Feed Me Violence’ builds on the momentum generated by their debut and brings more variation to the formula as the foursome continue to perfect their blend of classic thrash with a contemporary twist. The live DVD ‘Surge of Insanity’ (2019) captures the live prowess and relentless drive of this well-oiled machine and documents why they are serious contenders for the European thrash throne. Their new single, the stunning heavy metal ballad ‘In Deepest Black’, sees them venture into previously uncharted territory and illustrates the fresh approach the band took on their upcoming new album ‘Shattering Reflection’. Due to the pandemic they had more time on their hands to experiment, resulting in an album that strikes just the right balance between lacerating contributions and more anthemic tracks. If you can’t wait for Alcatraz to roll around you can also catch the album release show on 3 April in Antwerp.