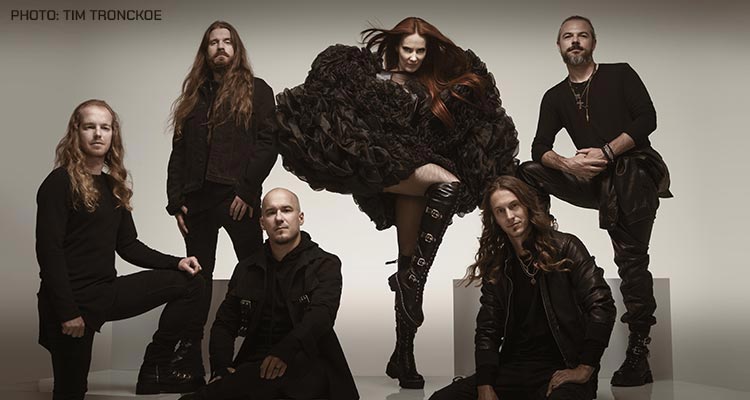 Epica was founded nearly twenty years ago. It’s been an eventful two decades that have seen them steadily climbing the metal ladder with every new release. Epica is founded by composer/guitarist Mark Jansen following his 2002 departure from After Forever.

After their ambitious debut ‘The Phantom Agony’ (2002) and a surprisingly eclectic sophomore effort ‘Consign to Oblivion’ (2005), their third album ‘The Divine Conspiracy’ (2007) aspires to new heights and makes it clear that Epica is here to stay. ‘Design Your Universe’ (2009) heralds a worldwide breakthrough, followed by their 2012 opus ‘Requiem for the Indifferent’. Still, this is only the precursor to their most successful outing to date with ‘The Holographic Principle’ (2016). Their steady output has brought this hardworking band to where they are today. In two decades they will have released no fewer than eight full-fledged studio albums because the long-awaited ‘Omega’ is set to be released on 26 February 2021. The new album has been a long time in the making but as it turns out this was a conscious decision. Lead singer Simone Simons told us in 2018 that “it’s been a rollercoaster ride so far" and following their 1000th live appearance it was time to dial back. Years of relentless touring were starting to take their toll and the band members needed time to regroup. Looking back, Simons recalls that “it was the first time we had actually taken some time off. It did us a world of good and it also gave us the chance to reflect on the past and look ahead to the future”. With their batteries fully recharged - and sooner than expected - they were raring to go again. Always the passionate musician, Mark Jansen remembers they entered the studio “with boundless enthusiasm but also with a strong resolve to take our performance to the next level. We found our sound years ago but within that concept there’s plenty of room for evolution. We always try to reinvent ourselves and add refreshing new elements”. Time will tell whether they succeeded on ‘Omega’ but we are convinced that Epica will consolidate their status as one of the leading female-fronted metal bands. A headlining slot on our infamous Prison Stage is the perfect opportunity to prove their mettle one more time.