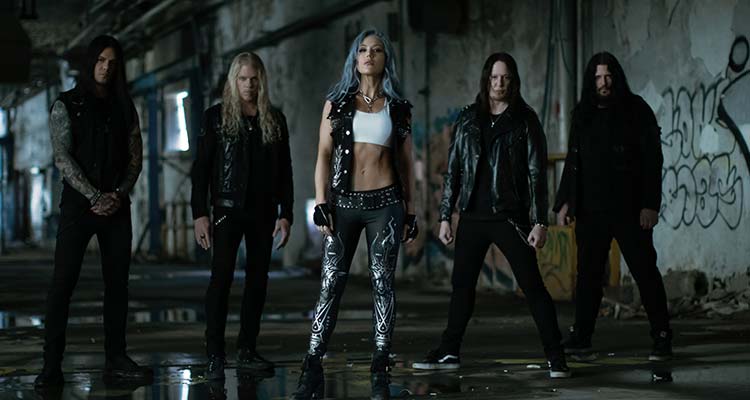 Arch Enemy emerged in 1996 as a death metal supergroup. Early on they adopted a more melodic approach without abandoning their aggressive DNA. The addition in 2000 of German death metal vocalist Angela Gossow was the missing piece to the puzzle.

She first featured on ‘Wages of Sin’ (2001) and from then on Arch Enemy went from strength to strength, culminating in ‘Ryse of the Tyrant’ (2007), their highest charting album to date. In 2014 Gossow passed the mic on to former The Agonist vocalist Alissa White-Gluz, opting for a life away from the spotlights as the band’s manager. ‘War Eternal’ (2014) laid to rest any concerns the fans might have had and ‘Will to Power’ (2017) is a genuine step up for Arch Enemy. As White-Gluz continues to explore her vocal range, the seasoned Erlandsson-D’Angelo tandem lays down the rock solid backbone for Arch Enemy’s sonic assault. The larger-than-life sound is owed in large part to the dual axe attack mounted by Chris Amott and Jeff Loomis, who makes his first contribution to an AE studio album. Arch Enemy’s blend of unadulterated brutality and spine-chilling catchiness is one of the main reasons why their fans are so loyal. This will once again be obvious from the new ‘Deceivers’ album, which is set to drop on 29 July. The new album will obviously include the two previously released tracks, ‘Deceiver, Deceiver’ and ‘House of Mirrors’. ‘Handshake with Hell’, the album’s first official single, will debut in the second week of February. Meanwhile give 2017’s live recording ‘As the Stages Burn!’ another spin and remind yourself of why Arch Enemy are consummate performers.