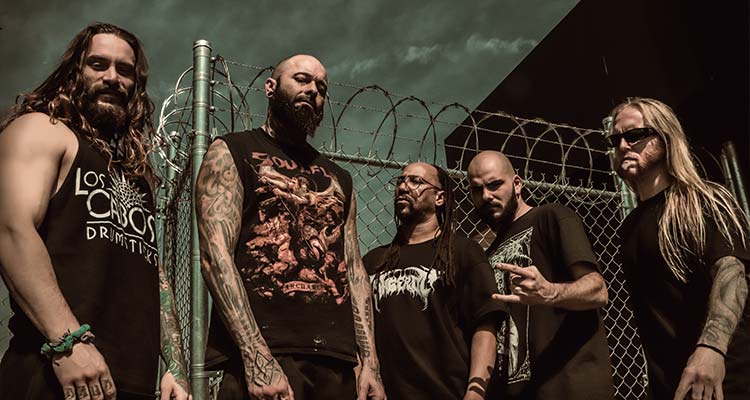 Suffocation formed in 1988 in New York and to this day their full-length debut ‘Effigy of the Forgotten’ (1991) is one of the most brutal debut albums ever; the breakdown riff in album opener ‘Liege of Inveracity’ is even credited as the first slam riff in death metal history.

Vocalist Frank Mullen’s pioneering low gutturals and his one-dimensional vocal attack was a blueprint for many death metal vocalists who followed in his footsteps. ‘Pierced from Within’ (1995) is an impressive slab of technical and brutal death metal. It was also the last before their 1998 breakup and subsequent reformation in 2003. Breakdowns are one of the hallmark aspects of their music and were instrumental in the emergence of the deathcore genre in the early 2000s. Suffocation’s new incarnation showed no desire to stray from the path of malignant brutality established by the original line-up and the atmosphere of oppressive fatality remained intact. The aptly titled ‘Pinnacle of Bedlam’ (2013) is as venomous and technically accomplished as their early output, reaffirming their status as one of the most influential death metal bands around. In 2015 Ricky Meyers took over as live vocalist from founding member Frank Mullen, who stopped touring in 2012 due to the demands of his new job. Suffocation are a must-see for brutal death metal fans.