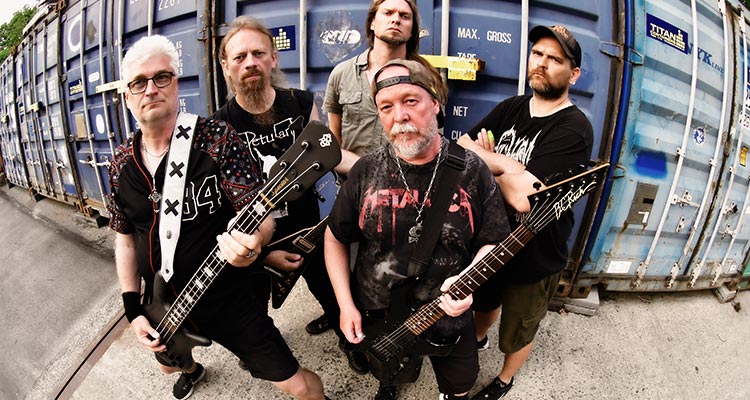 We’d like to start by sincerely apologising for waiting more than a decade to bill Artillery. These past few years we mainly focused on American thrash bands and we also broadened our horizons by programming a number of other genres.

However, the provisional line-up for our 2021 edition leaves no doubt that our love of thrash remains the red thread in the line-up: Testament, Exodus, Death Angel, Vio-Lence, Cyclone, Havok, Suicidal Angels, Exhorder, D.R.I., Destruction, etc. Thirty years ago Danish thrashers Artillery were one of the world’s most exciting thrash outfits. Whereas European thrash bands didn’t enjoy the same level of popularity as their American genre peers, Artillery certainly matched them in terms of quality. ‘Fear of Tomorrow’ (1985) and ‘Terror Squad’ (1987) sees them flexing their muscles. The material is very much inspired by what their American counterparts are doing but on ‘By Inheritance’ (1990) Artillery develop their own style and the onslaught starts in earnest. Highly technical in nature and overflowing with phenomenal riffs, their third album features complex song structures and the music itself is uncompromising yet melodic. The oriental influences on the record are a breath of fresh air whereas the lyrics are openly critical of Middle Eastern politics. ‘Khomaniac’ is an amalgamation of all these influences and the track quickly becomes a thrash metal anthem. Fast forward to 1999 with the aptly titled ‘B.A.C.K.’, an album meant to herald Artillery’s return to active status. Unfortunately the revival is short-lived and 12 years go by before a second reunion is announced, with a new vocalist. In 2012 he is replaced by current singer Michael Bastholm Dahl, who has meanwhile contributed to three studio albums. When founder/guitarist Morten Stützer dies in October of 2019 Artillery’s future briefly hangs in the balance but they decide to soldier on. We can even look forward to tracks from their brand-new album, which is scheduled for a spring 2021 release. Danish Dynamite at Alcatraz? Check!