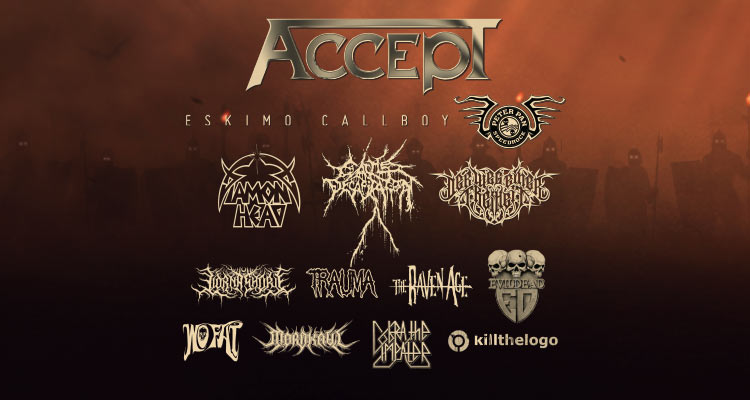 As if our 2022 line-up wasn’t impressive enough already with over 90 confirmed acts, we’ve got an end-of-year surprise for you with another 14 bands for next year.

Alcatraz regulars will undoubtedly know that we like to bill bands from all corners of the metal spectrum and cater to a multitude of tastes. This has always been a cornerstone of our philosophy and this year is no exception. From heavy metal veterans Accept to their black metal countrymen Der Weg Einer Freiheit and on to Prussian natives and metalcore/industrial sensations Eskimo Callboy, variety is still the operative word. Or how about NWOBHM stalwarts Diamond Head, without whom Metallica might never have existed. While we’re on the subject of Metallica, their legendary late bassist Cliff Burton was a member of Trauma in the early 80s. With a new line-up and armed with a new album, they are the umpteenth Bay Area band to play Alcatraz. George Harris is the son of NWOBHM legend and Iron Maiden leader Steve Harris. His band The Raven Age plays a different kind of metal altogether but it hasn’t stopped them from making some serious waves these last few years. Dutch rock fiends Peter Pan Speedrock have only one gear: full throttle. They’re back after a six-year hiatus but that won’t keep them from setting La Morgue ablaze. Two more incendiary bombs are set to drop on Kortrijk this summer: both Cattle Decapitation and Lorna Shore have their own bone-crunching take on brutal death metal. By comparison, Americans Wo Fat turn the speedometer down a few notches but stoner enthusiasts couldn’t care less. Putting together a festival bill means making some tough decisions. It was a toss-up between Evil Dead and Agent Steel but ultimately we settled on Evil Dead to bolster the generous selection of thrash bands already on the roster. Last but not least we’re pleased to introduce three homegrown bands that deserve our full attention: death metal revelations Mordkaul’s infectious tracks are indebted to Swedish melodic death metal, Cobra the Impaler is a regular hoard of talent – Mastodon, anyone? – and killthelogo is the evil bastard brother of the defunct .Calibre. We hope this new cache of bands will add some flavour to your end-of-year holidays! Fewer than ten bands to go now, including our headliners, so keep your eyes and ears peeled!

Day tickets will go on sale as soon as the last string of bands and next summer’s headliners have been announced.

Heavy holidays to you all! Alcatraz