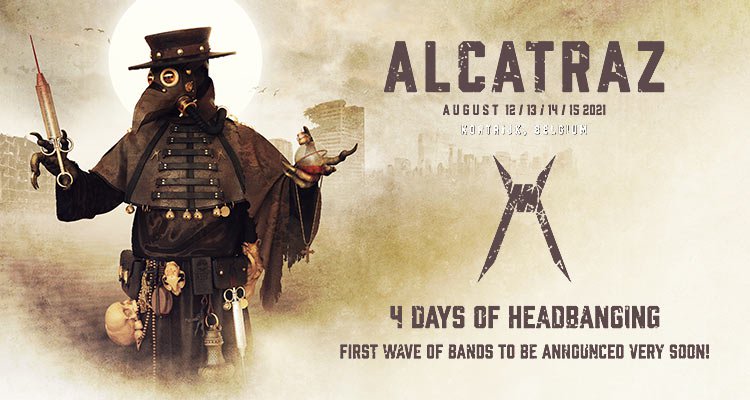 Nope, that’s not a typo! Next year you’re getting not three but four days of Alcatraz. It seems only fitting after a year when Covid-19 robbed us of the many festivals that usually add spice to our summer. The gates to the prison yard will swing wide on Thursday 12 August and we’ll keep rocking until Sunday evening 15 August. So tone up those neck muscles for four days of metal mayhem. Hell yeah!

You’ve undoubtedly heard rumours about the 2021 festival summer being in jeopardy but as no one knows what the situation will be three months from now we feel it’s complete nonsense to try and make a prediction for next year. Positive thinking and an optimistic future perspective is the message Alcatraz wants to share! We must remain confident that things will eventually return to ‘normal’. Our sector needs that kind of optimism because another disastrous year would be the coup de grâce for many organisers and suppliers. It’s no coincidence that a plague doctor is the central character in our poster for next year’s edition. Not only is this character a metaphor for the thousands of carers and so many others who have gone above and beyond the call of duty since this thing started, often with complete disregard for their own safety; it also embodies our common struggle - yours, mine and billions more - against the insidious little bug we’d all like to bury sixty feet deep.

We haven’t exactly been sitting still these last few months. Meanwhile the lion’s share of this year’s line-up has been carried over to our 2021 edition. A fourth day obviously means extra bands but no worries there, we’ve got several fun surprises to add to what is already an acclaimed line-up. We’ll be announcing an initial batch of names shortly so keep your eyes and ears peeled.

From 30 April to 31 May our festival-goers had the chance to apply for a ticket refund. A minority made use of this option and some even sent us a thank you message. We were happy to help because we understand full well that some fans find it hard to make ends meet. However, the lion’s share of ticket holders decided to hang on to their tickets for next year. As of 2 June these tickets (with adjusted dates) will be available on their Ticketmaster account under My Account. “I already bought a combi ticket so what about that fourth day?”. This is bound to be one of the most popular FAQs so let’s answer it right now: combi ticket holders will not be charged extra for this fourth day! What’s more, those fans who don’t have a ticket (yet) will shortly be able to buy their combi or VIP ticket (for 4 days) at the ‘old’ rate. This six-month early bird campaign will last until 15 December to give our visitors ample time to buy cheap tickets. Only then will prices be adjusted for combi and VIP tickets and at this time day tickets will also go on sale. Please also take note that the campsite will be open from Thursday 12 August until Monday 16 August. This means that four is still the maximum number of nights, as was originally the case for this year’s cancelled edition. Camping prices remain unchanged.